Board approves initial Mildred Hailey rebuild, will include replacement of 253 existing public-housing units, creation of 420 new apartments in Jackson Square 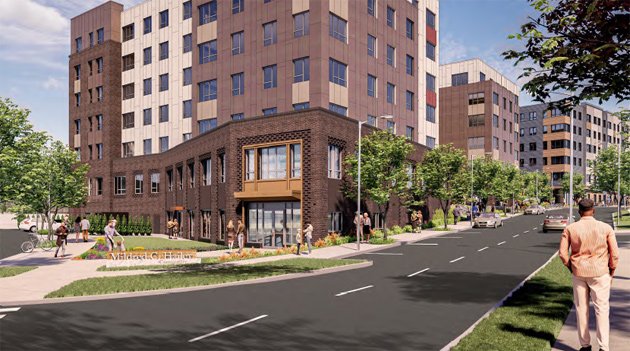 The view from the new Lamartine Street. Rendering by Stantec and Dream Collaborative.

The BPDA board today approved plans by developers to raze several buildings at the sprawling Mildred Hailey Apartments complex in Jamaica Plain and replace their current 253 Section 8 apartments with all new units – and add 420 additional income-restricted apartments and an all new street grid, green space and pathways intended to stitch the complex into the neighboring community, rather than walling it off.

In addition to the new residential buildings, plans by the Jamaica Plain Neighborhood Development Corp., the Community Builders and Urban Edge include a new home for the Anna Mae Cole Community Center.

Unusual for a large-scale BHA redevelopment, while current residents will have to vacate their current apartments when their buildings are torn down, they will be offered other apartments within Mildred Hailey, rather than forced to move across town, as has happened with other BHA redevelopment projects. This is because the project is just phase 1 of an eventual complete re-do of the complex. The BHA has yet to request bids for replacing the roughly 550 remaining apartments at the complex.

Although initial plans called for some market-rate and high-income units, the plans approved today for the new units call for them all to be rented to people making between 30% and 120% of the Boston-area median income. Included in the 420 new units are 56 income-restricted units outside Mildred Hailey but in the Jackson Square area.

Key to the plans, which focus on the area along the Southwest Corridor and Centre Street next to the Orange Line station, is to try to make Mildred Hailey more of a part of the surrounding Jackson Square neighborhood. Where the buildings along Centre now meet the street at an angle, with numerous zig-zag pockets that make good hiding spaces for criminals, the new buildings will form a “street wall” that will feature ground-floor retail space. Lamartine and Bickford streets will be extended from Centre to Heath Street and new, tree-lined walkways will give people a way to get around that doesn’t involve cars. The community center will get a new plaza as well.

The view from Columbus Avenue:

Buildings will have courtyards: 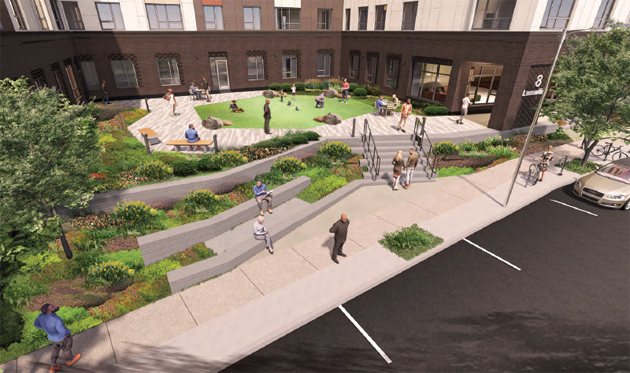 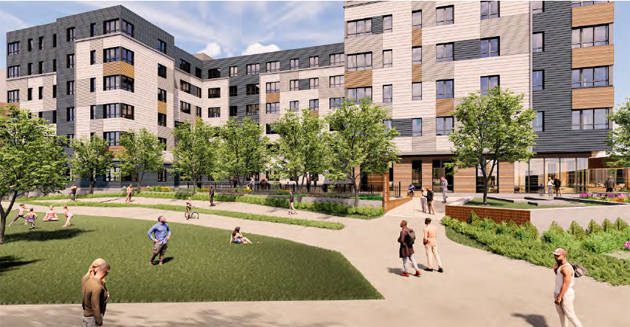